In the first quarter of 2020, the virus SARS-CoV-2 has triggered a global pandemic of the flu-like but more dangerous disease COVID-19. In an attempt to contain the further spreading of the virus, like most countries across Europe and around the world, Germany has imposed considerable restraints on the freedom of movement and business, which had brought much of social and economic life to a standstill. Governments are preparing rescue packages of unprecedented dimensions to help businesses struggling to maintain their liquidity with credit and guarantees, which of course pushes up sovereign debt. At the same time, the stock markets remain open – these two developments do not go together well. Stock prices are in free fall, making perfectly healthy companies suddenly look like takeover targets. And yet there is a logical connection between the adequate allocation of the federal aid and the crisis-driven stock prices.

However long the pandemic may last – it will be over at some point. What we will be left with, besides much human suffering, is a weakened economic that will take a long time to fully recover – but even that will be achieved eventually. Many a past crisis was overcome sooner than one dared to hope for. One of the longest-lasting effects of the coronavirus crisis will be the redistribution of the ownership structure in the economy that is currently underway at the stock markets. These shifts have nothing to do with real trade, as the strength or weakness of the companies being traded cannot be assessed on the basis of the current situation amid the crisis. This redistribution may for example entail the gradual nationalisation of individual companies, or their potentially hostile takeover by faceless hedge funds. The former will raise hackles with cosmopolitan economists, and the latter with concerned citizens. Incidentally, my hair stands on end on both accounts.

None of the arguments for keeping the stock markets open – e.g. that the markets remained open even in times of war or during the 2008 financial crisis – are applicable to the current special case of a national, self-imposed lockdown of the economy. In a presentation held on March 18, 2020, which is available online (youtube) in German, Professor Sinn has called the lockdown an “economic transaction ban” and made the fine distinction between “liquidity crises” of the type we have already encountered several times and the current coronavirus crisis, which in his opinion constitutes the first true “solvency crisis”. We hold that such a solvency crisis probably applies in times of war – yet not at the time of the declaration, but indeed after the bombing. 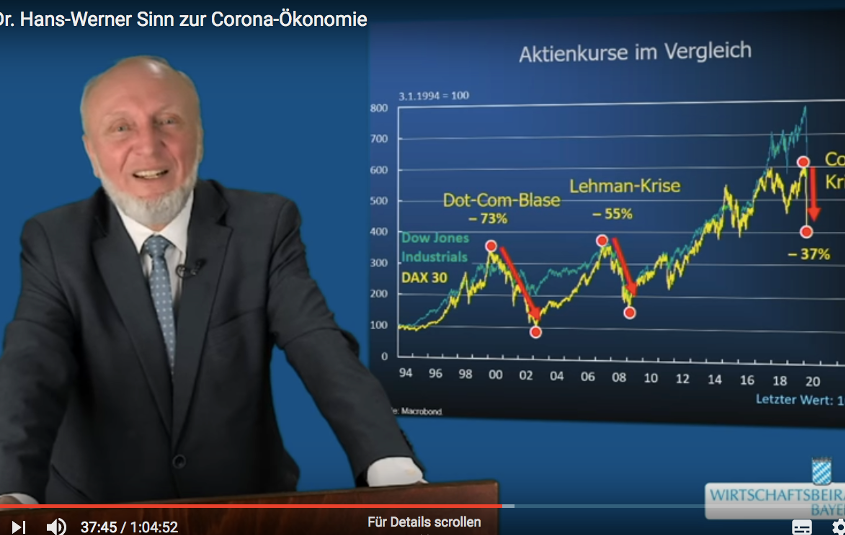 Professor Sinn speaking on the current situation on March 18, 2020

In our view, the two most substantial arguments against closing the stock markets fail to hold up in the face of the coronavirus crisis:

To merely close down the stock exchanges and to reopen them a few weeks later would be a somewhat naïve approach. The big question is, what will the starting share prices be, after much will have happened to the companies in the meantime, to some extent independently of the virus, so that all company values will have to be reassessed from scratch. To use the last trading prices before the close of the markets would lead to utter chaos on the opening day. However, it can also be argued that chaos on a single day is still the lesser evil compared to several weeks of chaos with unrealistic price fluctuations driven only by gamblers – yet that is precisely what we are looking at these days. German stocks expert Dirk “DAX” Müller has very aptly described what is currently happening on the exchanges, which are prone to being closed for weeks in any event, in a video from March 25, 2020 (see www.youtube.com/watch?v=eYHeE_hwt30 in German).

Speaking as a game theorist, I would like to propose a pragmatic solution, whose feasibility stock market theorists and politicians are welcome to debate: The stock markets should indeed remain open, but without processing any real trade for the time being. For as long as trade remains suspended in this fashion, all market participants will continue to be asked about their buying and selling offers every day on the basis of the currently available information, and a clearing price will be determined for every share. However, the transactions are not carried out right away but are rather accumulated over each trading day. At the end of each trading day, the government decides whether A) trading remains suspended, in which case all transactions of that day are void, or B) the markets are allowed to open in their usual form the next day. In that case, and only in that case, all transactions of the previous trading day are actually executed. Only this uncertainty regarding how the government will decide can ensure that real prices form during every day of the trading suspension, for each new suspended trading day may with hindsight in a sense turn out not to have been suspended after all.

Note that we must not confuse “real prices” with “realistic prices” at this point. The essential purpose of this “shadow stock exchange”, whose effect is suspended but which nevertheless operates in real terms, is to generate real prices. Due to the crisis, we may expect these prices to be very low. And it is precisely because these prices differ substantially from the companies’ value in a hypothetical world without a ban on economic transactions that we propose to also ban all transactions concerning shares in companies that are subject to transaction bans in the real economy.

The second major challenge brought forth by the coronavirus crisis that the shadow stock exchange can help to overcome is the allocation of the large government rescue package that is to benefit individual companies in the form of guarantees and credit. This allocation is currently achieved via the banking system in the form of credit commitments – with all due respect, a sufficiently chaotic and distortive procedure. This is exactly the point where the capital markets, whose transparency produces real prices, may come in handy. Every day, the shadow stock exchange in the form proposed above delivers current and real stock prices, which may be interpreted as the answer to the question, “If the markets were to open tomorrow, how much would this company be worth?” The difference between the share prices that prevailed before the onset of the crisis (or before the closing of the stock exchange, in case the onset of the crisis has already come and gone)) and the daily prices on the shadow stock exchange can constitute a meaningful key by which to distribute each daily ration of the government rescue package.

We may request cookies to be set on your device. We use cookies to let us know when you visit our websites, how you interact with us, to enrich your user experience, and to customize your relationship with our website.

Click on the different category headings to find out more. You can also change some of your preferences. Note that blocking some types of cookies may impact your experience on our websites and the services we are able to offer.

These cookies are strictly necessary to provide you with services available through our website and to use some of its features.

Because these cookies are strictly necessary to deliver the website, refusing them will have impact how our site functions. You always can block or delete cookies by changing your browser settings and force blocking all cookies on this website. But this will always prompt you to accept/refuse cookies when revisiting our site.

We fully respect if you want to refuse cookies but to avoid asking you again and again kindly allow us to store a cookie for that. You are free to opt out any time or opt in for other cookies to get a better experience. If you refuse cookies we will remove all set cookies in our domain.

We provide you with a list of stored cookies on your computer in our domain so you can check what we stored. Due to security reasons we are not able to show or modify cookies from other domains. You can check these in your browser security settings.

We also use different external services like Google Webfonts, Google Maps, and external Video providers. Since these providers may collect personal data like your IP address we allow you to block them here. Please be aware that this might heavily reduce the functionality and appearance of our site. Changes will take effect once you reload the page.